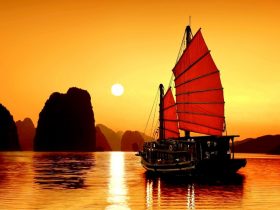 Forget chicken, beef, fish and shrimp, time to try out all that’s weird and wonderful on the Hanoi cuisine scene. Edward Dalton hits the weird food hotspots in the capital with not a dog or cat in sight. Photos by Julie Vola

The taste buds of Eastern and Western people are tickled in hugely different ways, and it took some work on my hang-ups before I could set out with an empty stomach and an open mind to track down some of the more unusual dishes Hanoi has to offer. 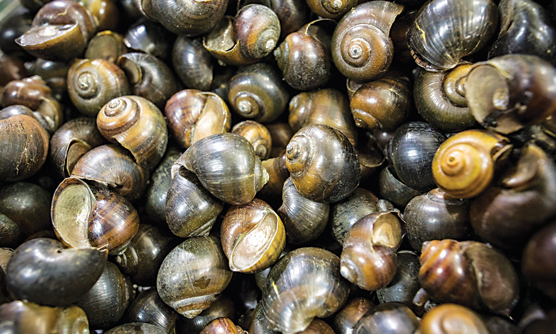 In Vietnamese: Cut lon xao me and oc luoc

Weird Analysis: Various types of snail are eaten in many countries, but are still not entirely mainstream for foreign visitors to those countries. Fertilised quail eggs are a common dish among in Vietnam and Southeast Asia.

The fertilised quail eggs are best served in tamarind sauce and are small enough to fit on a teaspoon. They’re still quite young, so identifying the constituent parts of the semi-formed quail is (thankfully) quite difficult. As your teeth bite through one, you will notice a range of textures revealing themselves one after the other, ranging from soft boiled egg white to firm and chewy cartilage. The rich fatty taste of a normal egg yolk is amplified, but the tamarind sauce helps to even things out. 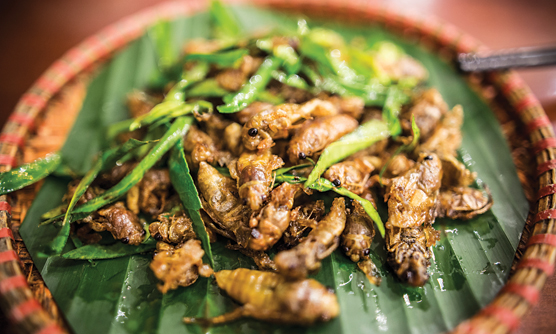 Weird Analysis: Most insects are not often found on the city-dwelling Vietnamese dinner table, but do find more popularity in mountainous regions and the countryside. Experts laud the nutritional qualities and environmentally friendly farming that edible insects offer.

Cicadas are a type of jumping bug, but after being well and truly roasted with lime leaves you will need chopsticks to help them into your mouth. The texture is mostly crispy with a slightly softer interior. Flavour-wise, they tickled my umami sensors to the point where they actually became quite addictive — almost reminding me of bacon crisps. The ant eggs can be served in a variety of guises, but I ordered the simplest version which just came with sticky rice. A really savoury and thoroughly satisfying dish, the ant eggs had the texture of stuffing, and blended well with the sticky rice grains and crispy shallots sprinkled on top. 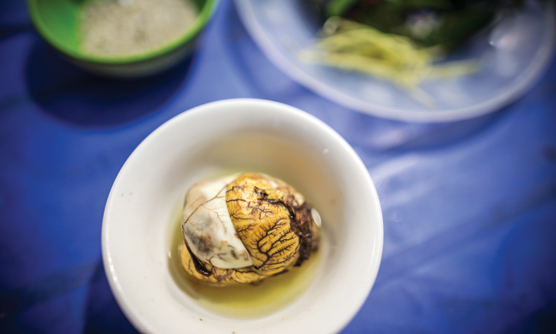 Weird Analysis: A dish unlikely to win any awards for aesthetics, the infamous balut, or fertilised duck egg, is surely the pinnacle of weird food, despite being a common dish in Vietnam and Southeast Asia.

Best enjoyed with a blindfold and a litre of vodka to dull the senses, the fertilised duck egg is served without any bells or whistles. A sprinkle of salt and pepper, a handful of herbs and a few shreds of ginger are all that stand between you and an attack on the taste buds not soon forgotten. Similar in taste and texture to the fertilised quail egg, but bigger and bolder. I’m told if you poke around inside a bit, you can find the little half-formed duck head somewhere. No thanks. 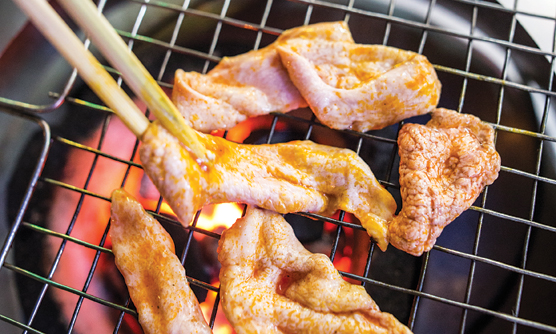 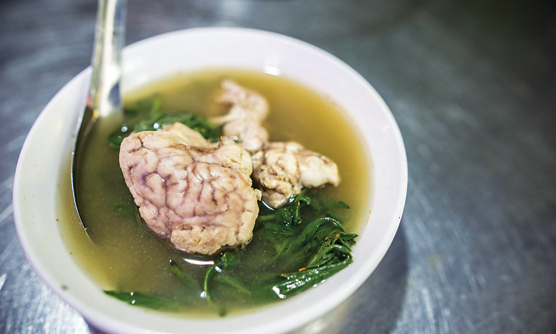 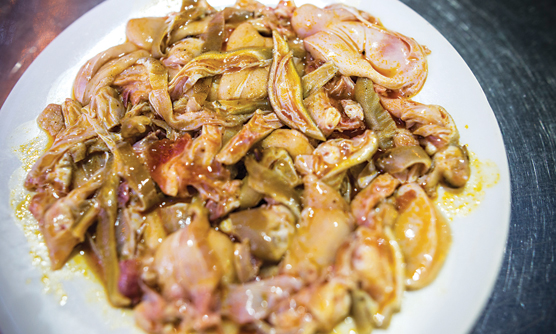 Weird Analysis: Penis and testes of various animals are consumed in the Middle East, as well as in China. Brain can be found around the world, even served in sandwiches in Missouri, USA. Udders are less popular, but can be found in France sold by the slice.

At the risk of making a tasteless joke, it’s fair to say goats are not ‘blessed’. The penises and testes were rather small, as were the udders. The brain, however, was served whole in a bowl of wormwood broth. Our goat feast guide, local chef Shahar Lubin from Daluva, took charge of grilling the goat’s extremities at the table. The penises were mild in flavour, but incredibly tough to chew, almost like a mouthful of jumbo rubber bands. Udders were similarly chewy, but possible to break up enough to swallow with a very faint fatty taste. A testis is softer, and best dipped into a bean sauce. The brain had a texture somewhere between thick double cream and soft scrambled eggs, and mostly tasted of the herbal broth it was served in; surprisingly tasty. 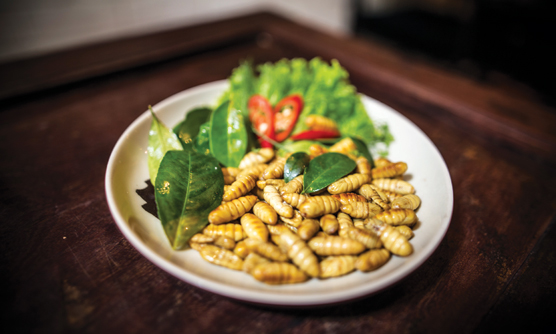 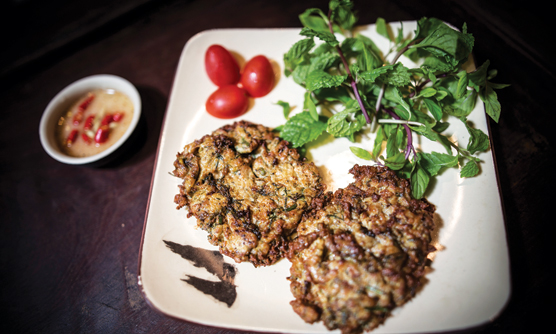 Weird Analysis: Anything worm-like is bound to raise a few eyebrows among Western visitors to Hanoi, where locals consider the seasonally available sand worms as a luxurious treat worth freezing for future use.

Not usually available during this season, the samples we ate had to be specially procured by Dan Dockery from Highway4. The silkworms had a very lightly crisped exterior with a soft and creamy interior, possessing an earthy and faintly gritty taste. Dipped in salted spicy lime juice, they were reasonably pleasant. The sand worms are mixed into an omelette with orange zest and dill, and were surprisingly delicious. This dish was halfway between a pork burger and an eggy fritter, and was thoroughly enjoyable. 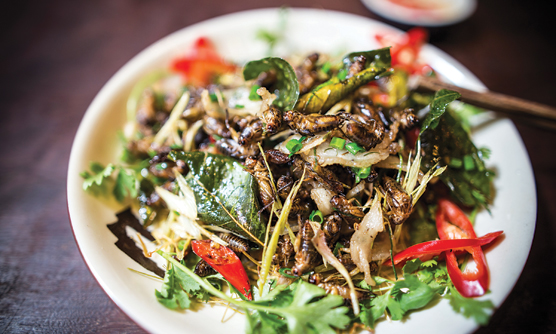 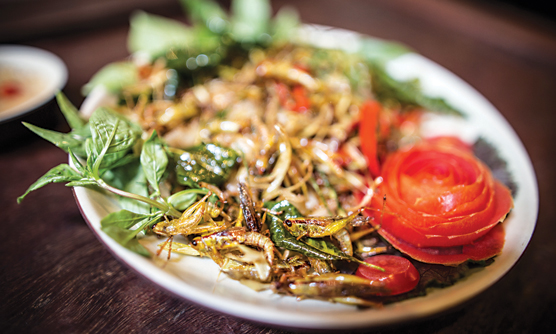 Weird Analysis: Frog meat is reasonably common in Southeast Asia, Iberia and parts of Southwestern Europe, Greece and the USA. Around 2.5 billion people consume insects as a regular part of their diets.

Back to Highway4 again for more commonly available menu items. Dan says the insects are the perfect bar snack as they are salty, crispy and savoury. The crickets were fried with lime leaves and pig fat, and similar in texture to the cicadas, although with a slightly bitter aftertaste. The locusts were somewhat blander, but dipped into a sauce made for a decent snack. The frog skins were fried with betel leaves, and had a strong crunch I’d usually associate with a premium bag of crisps — pretty tasty with a salty dip.

As a guide to weird food available in Hanoi, this list is far from comprehensive. Many of the dishes here are fairly common around Vietnam, as is nom sua (jellyfish salad) and chao long (pig innards). There are even popular Vietnamese foods known to foreigners which can be weirded up if you know where to look. Banh cuon, for example, is a very popular breakfast and lunchtime dish, but becomes even better if you have a drop of tinh dau ca cuong (stink beetle essence) added to the dipping sauce. Although my mum might still recoil when I tell her that creamy brains are on the next Christmas lunch menu, I hope everyone else will use this guide as a starting point to experience more Vietnamese cuisine than just pho bo and bun cha Obama. 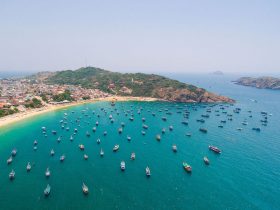 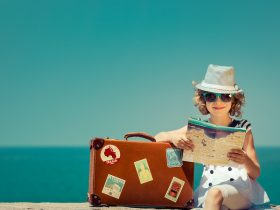 Top 10 Reasons Why You Should Start Traveling 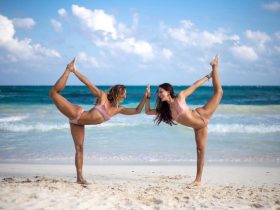 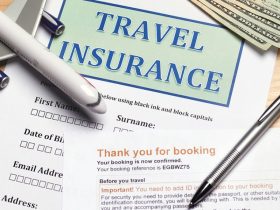 Why You Need Good Travel Insurance